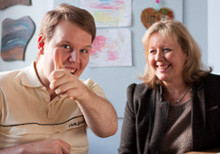 On his way to work one morning, Jon, aged 19, was involved in a head-on car collision. ‘I can’t begin to tell you how it felt to get that dreadful knock on the door and hear the police tell us our son had been air-lifted to hospital with life-threatening injuries,’ says  Paulette, Jon’s mother.

The accident left Jon with a brain injury which meant that he couldn’t support his body, hold his head up or even swallow. To his mother, seeing Jon surrounded by wires and equipment was the worst moment of her life. ‘In a split-second, everything he’d ever dreamed of and hoped for was shattered, and his life changed forever.’

Despite the challenges lying ahead, Paulette never doubted that Jon would pull through. Each small step Jon made, such as opening an eye or tracking people with his gaze, was an important milestone to be celebrated.

At National Star College Jon learnt to focus his energy on achieving what was possible. Jon has learned how to communicate with noises and gestures, enabling him to express how he feels and make his own decisions and has regained some speech. Through hydrotherapy, he has even been able to take his first steps since the accident, an amazing achievement accomplished through a ‘can do’ attitude. Now living at Foundation House, one of National Star’s residential care accommodation in Gloucester, Jon is enjoying his independence and is excited about what the future will bring.