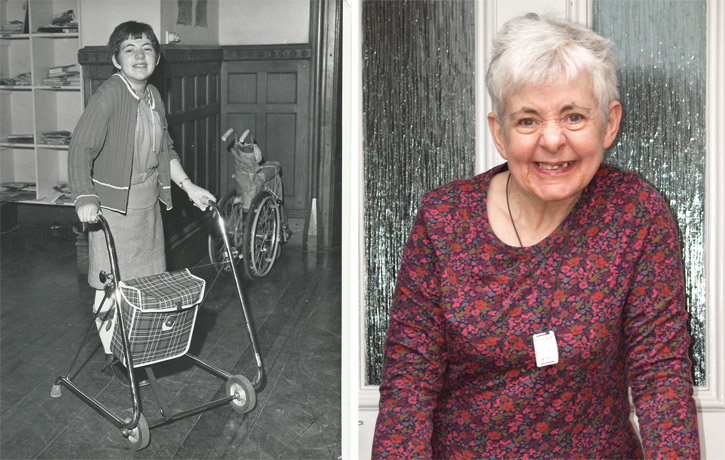 Ruth came to National Star (then The Star Centre) in 1969 as a 16–year–old. She was one of 40 residential students. Ruth was already used to living away from home and had done so since the age of two.

‘I was a twin. When my brother started to sit up and I wasn’t my mum took me to the doctor. He said I was “backwards” and recommended I go into hospital. Even he hadn’t heard about cerebral palsy. I was kept in a cot at the hospital for two years.’ – Ruth

When she finished her two years at college in 1971 Ruth didn’t want to move back home. She wanted to be independent but the closest suitable accommodation available at that time was in Swansea. Ruth later returned to Somerset and moved into purpose–built accommodation in Taunton.

Ruth finally secured her own home in the late 1980s. She still lives in the same bungalow in Somerset, maintains her independence and has a wide circle of friends.

Supporting a wide range of learners

Ruth, who has cerebral palsy, arrived at The Star Centre with her ‘rollator’ (wheeled walking frame) and a manual wheelchair.

In 1969 The Star Centre was entirely based in the Manor building and a nearby stable block which was converted into an occupational therapy workshop. Ruth’s room was on the first floor of the Manor and she shared it with three other girls. The downstairs rooms included a dining hall, a typing room and a common room where students spent much of their leisure time. The fire escape was a covered fibre glass slide accessed from the first floor and which Ruth used during a fire alarm.

In 1969/70, 17 students had work placements. One of those was Ruth, who weighed and packed tobacco at Prospect Works, a sheltered workshop in Gloucester. Ruth’s occupational therapy report said: ‘Ruth is a very industrious young lady, who, in spite of her handicap, is capable of a day’s work provided the right job can be found for her.’

Students had classes in mathematics, English, typing, social studies, cookery and independence training. Ruth used an IBM typewriter rather than writing. Her education report of 1969 said: ‘In typing Ruth has maintained her progress and has increased her speed.’

‘On the Youth Hostel trip Ruth walked long distances and made herself helpful with hostel chores. Her general physical tolerance has improved.’ – Occupational therapy report, 1970

As well as taking her classes, Ruth, like her fellow students, had physiotherapy, occupational therapy and speech therapy. At the time, physiotherapy treatment came mainly in the form of sport such as hiking, weight lifting, riding and swimming. Ruth’s physiotherapy reports mention her being fitted with calipers and walking unaided.