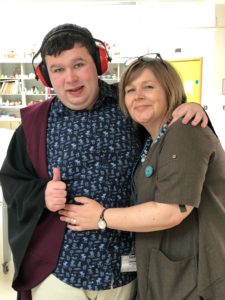 Charlie Watson achieved the one thing his family only dreamed of for him – his independence.

‘I used to fear what would happen to him in the future when I could no longer look after him,’ said Charlie’s mother Kath. ‘National Star gave Charlie and our family a life.’

When Charlie, who has autism and severe learning difficulties, arrived at National Star, he struggled interacting with people he didn’t know. His difficultly in dealing with change, his limited communication and the struggle to manage his anxieties often led to challenging behaviour.

When he started as a residential student at National Star his parents did not think that he would last more than a few nights.

Without the secure and quiet environment of Lake House, it is unlikely that Charlie would have coped.

Lake House was funded largely by a legacy and provides a quieter residence with only five students and a small dedicated team to support them. While there is a communal area there is also more space for students to withdraw to and be on their own.

That small consistent support team enabled Charlie to develop strong bonds and relationships. More importantly, it helped him feel safe and less anxious. As the team got to know Charlie they discovered that his cautiousness and aloofness were hiding his real personality. He could appear intimidating or indifferent to others but in reality he is gentle and very caring.

Charlie is a changed person leaving National Star. He has gone from a young man who wouldn’t interact with students to performing on stage with his peers – and enjoying every moment of it. Charlie cooks for himself, showers, shaves and dresses himself. He cleaned his flat at Lake House and did his own shopping and menu planning.

Now Charlie is making the transition to long-term supported living – something his parents never thought possible.

‘We assumed he’d be with us forever and we had talked about one of us giving up work to care for him,’ said his parents.

‘Now his life is filled with independence. Staff at Lake House have taught him to do those daily things we take for granted.’

‘For our family the life we have now is a life filled with confidence. Confidence to let Charlie blossom, to entrust him to others and let him be his own man.

‘We used to fear the future of our family – but we don’t anymore, thanks to National Star.’

Continue to find out more about gifts in Wills