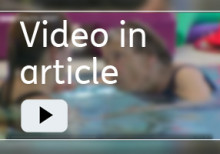 And while she might not swim quite as fast as she used to, Sadie said it was ‘beautiful’ to be back in the water.

The adventure started when Oakhaven Residential Care Home in Cheltenham, where Sadie lives, launched its Wishing Tree project. The idea was to give the care team the opportunity to make residents’ wishes come true.

Sadie’s first wish was for world peace. As that was a bit ambitious the staff asked her for a rather more realistic wish.

She didn’t hesitate –  it was to go swimming. Sadie, who has lived through two world wars, has always been a keen swimmer. She and her husband swam every day.

The last time she had been swimming was more than 30 years ago.

‘Ever-active Sadie is always full of ideas and with a smile and glint in her eye she told me that she would love to go for a swim,’ said Claudia Ehler, Oakhaven’s Activities Coordinator.

‘National Star in Cheltenham jumped at the opportunity to help make her dream come true.’

A 100 year old lady’s wish has been granted- to go for a swim! What’s your wish? pic.twitter.com/4gJ5hawaaF

At National Star’s college site in Ullenwood, near Cheltenham, we have one of a few hydrotherapy pools in the region where every session is run by a physiotherapist. Every year it is used for more than 4,000 hours of aquatic therapy.

With the water kept around 34C, the pool is one of the few areas where people with limited movement can have a sense of independence and to move about independently.

Sadie, who had to buy a new swimming costume for the occasion, agreed. ‘It was lovely, just beautiful. I can’t walk a lot now and to go swimming was such a sense of freedom.’

‘Sadie did amazingly well considering it is the first time she’s been swimming for more than three decades,’ said Kerry. ‘She was determined to do as much as she could for herself.’

What’s next on Sadie’s list? ‘Well I’d like to go up in an airplane if they would let me fly.’