A moving visit to Auschwitz-Birkenau 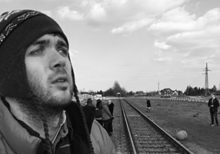 Matthew Hamilton, who has autism and Asperger syndrome, and Jack Smith, who has cerebral palsy, visited the camp in Poland as part of the Lessons from Auschwitz Project run by the Holocaust Education Trust.

It is estimated that close to 250,000 people with disabilities and learning difficulties were murdered under the Nazi regime’s T4 programme. The first experimental gassings took place at the killing centre in Brandenberg and thousands of disabled patients were killed in gas chambers disguised as shower rooms.

The model used for killing people with disabilities was later applied to the industrialised murder within Nazi concentration and extermination camps such as Auschwitz-Birkenau.

For Matthew, who is aged 23, learning how people with disabilities were treated in the regime was a very emotional experience.

‘It is difficult to understand why conditions were so different from these days,’ said Matthew. ‘People with disabilities were murdered. It was very emotional.’

Matthew took part in the memorial service held next to the destroyed crematoria.

‘We lit a candle to remember the people who died,’ he said. ‘It’s important that we remember because this did happen and shouldn’t be allowed to happen again.’

Kayleigh Hunt, one of the National Star tutors to go on the trip with the students, said: ‘Matthew was overwhelmed by the size of Birkenau. As we walked from the coach to the gatehouse he asked “Does it go on forever?”

‘Jack remained quiet and reserved throughout the visit. A prominent moment for Jack was when we entered one of the blocks. Jack flicked through only some of the thousands of pages from the death books in Auschwitz. Jack used his communicator repeatedly saying “upsetting”.’

Viv Wright, a National Star tutor, said: ‘Although a harrowing and emotional trip, Matthew and Jack said they enjoyed the experience. It was well organised and the Lessons from Auschwitz staff were very helpful and friendly.’

Find out more about National Star’s varied and person-focused curriculum by browsing our learning programmes.