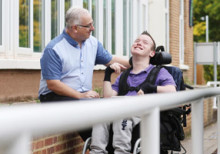 An Aberdare dad who lobbied Assembly Members so his son could have the specialist education he needed has been shortlisted for a St David Award.

Full-time carer Anthony Evans spent 18 months campaigning for funding for his son, Arwel, and others with profound and multiple learning difficulties and complex disabilities to receive suitable post-19 education in Wales.

His work was instrumental in the government’s funding of National Star, which opened a day provision in Mamhilad, near Pontypool, Torfaen, in September 2016.

Before it opened 19-year-old Arwel’s only suitable option was a residential specialist college outside Wales, or a day centre where his learning would not continue.

When Mr Evans, of Cwmbach, heard he had been shortlisted for the St David Award Citizenship category, the humble father-of-twins was flabbergasted.

‘It’s an honour to be recognised for a St David Award but I don’t think I’ve done anything special. I’ve fought for my son and other young people like him to have the opportunity to continue learning, but I would do anything for my son to have that so the fight to get it felt natural.

‘It’s only when people started speaking with kindness for what I’ve done that I realised I’ve done something good.

‘Because Arwel has a twin brother it became clear from an early age that he wasn’t going to get the same opportunities that his able-bodied brother has. When they left school Owain had three options. Arwel didn’t have any here and he wanted to go to college.’

The St David Awards are the highest accolade the Welsh Government can give to citizens who have achieved something exceptional or made a significant difference to their country.

The winners of the nine categories will be chosen by the First Minister and his advisers and announced on March 23.

National Star offers education for young people aged 19 and over who have profound learning difficulties and complex disabilities. It provides highly individual sensory-based teaching that enables learners to develop their skills.

Arwel has already grown since he started in September. He has speech and language therapy, hydrotherapy and is enjoying learning.

‘He’s learning new things all the time. We’ve already seen improvements in his communication, his laptop skills are far-exceeding what he’s done previously and his appetite to change his diet, to feed himself, has increased.

Mr Evans smiles as he says he hopes being shortlisted will give him extra kudos when he is pressurising the government for things he and other parents need, such as help with the costs of getting their children to National Star.

‘I can’t go from hero to zero too quickly so I’ll be using this honour for the benefit of the students and other young people like Arwel,’ he laughs.

National Star, Mamhilad, is holding an open day on 9 March, from 10am to 3pm. RSVP to mamhiladevents@nationalstar.org if you’d like to visit and find out more about the learning opportunities.