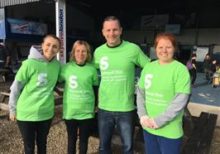 A Gloucester man has been so inspired by the charity he started working for a year ago that he jumped out of a plane at more than 10,000 feet to help it raise much needed funds.

Adam Hockaday had often thought he’d like to do a tandem skydive but working for National Star gave him a reason to make the leap.

‘I joined National Star in October and have been overwhelmed by what we do here, I wanted to be able to help,’ he said.

‘Doing the skydive was an amazing experience and I highly recommend it. The best bit was free-falling from 10,000 feet – the worst was watching the person in front of you disappear out of the plane before you!

‘It is something that I always wanted to do and it enabled me to raise money for National Star.’

Adam, 35, is head of building and site services for National Star, which works with young people with complex disabilities, including physical and learning disabilities, acquired brain injuries and autism.

He was one of three members of staff who took part in the challenge. The group, including one woman’s mum, raised almost £1,800 between them. Adam himself has raised £871.14 for National Star with his jump.

Our next skydive takes place in April 28 2018.  For more information contact our Fundraising team at fundraising@nationalstar.org or call 01242 524478.