Alec’s day at the Cheltenham Races 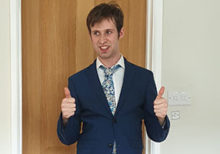 For Alec Davies going to Cheltenham Races wasn’t just a day out, it was the accumulation of months of hard work.

The 21-year-old was among a group of 12 National Star students who went to Prestbury.

Alec, who is severely learning disabled, finds it challenging to cope with unfamiliar situations. He needs the structure to help him to feel safe and confident.

When he expressed a wish last October to go to the races, National Star staff worked with Alec preparing him for his big day.

Alec uses ‘now and next’ cards which include visual symbols to help him understand what is going to happen in his daily routine. National Star prepared a series of picture stories to help Alec understand what it would be like at the races.

‘Alec had prepared his bets in sessions by studying pictures of the horses from race cards. Alec managed to win on his very first race a modest £7.50 from a £2 bet,’ said his tutor Kayleigh Hunt.

‘He cheered with the crowd and his peers as the horses ran passed the finishing post and circled at the end of the track. This was a major accomplishment for the 12 students, coping with the atmosphere, the amount of people and the change of routine.

‘Alec enjoyed the day. He has already asked to go next year.’