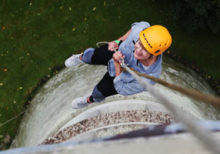 Gloucestershire business leaders overcame their fear of heights in a sponsored abseil in aid of National Star.

Katie Armstrong, Managing Director of Safehands Recruitment in Cheltenham, was one of 40 people to climb over the parapet at Easton Castle to abseil down the 100-foot turrets.

The last time Katie, aged 34, did an abseil was almost 20 years ago. It took the then teenaged Katie two hours to abseil down her school building. ‘I cried all the way,’ she admits.

‘Going over the turrets was the scariest bit but once over and starting to abseil it was great and really exhilarating.’

The five members of the Safehands teams has so far raised £500 for National Star.

‘I love the ethos of National Star and anything myself or my team can do at Safehands to support that then we’re 100% willing,’ said Katie.

Other companies taking part in the event were ITS Construction Recruitment, Simplicity Recruitment and EDF Energy.

Suzanne Hall-Gibbins, who is Director of business network Circle2Success – who have their HQ in Cheltenham – also overcame her fear of heights to take part in the abseil.

‘We did the firewalk with National Star last year and that was just an amazing experience for such a good cause. It was such an exhilarating evening,’ she said. ‘I don’t like heights at all, so I thought this was a personal challenge for myself.’

National Star’s Head of Commercial Enterprise, Pete Johnson, lost two stone in less than 10 weeks so that he could get through the turret hatch and complete the abseil.

Over £5,000 has already been raised in sponsorship by the brave abseilers, with more expected in the coming weeks.