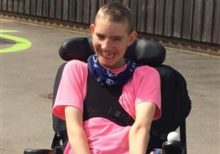 A young Abergavenny man with a rare genetic condition has proved disability is no barrier to supporting others.

Callum Arnold, who uses a power wheelchair, organised a ‘bounce marathon’ to raise £217 for National Star, which supports him and other young people with complex disabilities and learning difficulties.

The 20-year-old has Lesch-Nyhan Syndrome, a rare genetic condition caused by an enzyme deficiency. It affects just one in 380,000 people.

It leads to symptoms such as uncontrolled muscle movement, lip and finger biting or banging of the head, and neurological impairment.

He attends National Star near Cheltenham in Gloucestershire.

He promoted the event, convinced staff and fellow students to take part, organised a cake sale and sorted all the health and safety assessments for the event.

‘It was really hard to organise but it was a really good event. I am proud of what I achieved,’ said Callum, who is in his second year at National Star.

‘National Star would not be able to provide the wonderful facilities without the generous support of donors and people like Callum,’ she said.

‘It would have taken a great deal of effort for Callum to organise this event and we appreciate all the hard work he put into it. His selflessness to support other young people is truly commendable.’