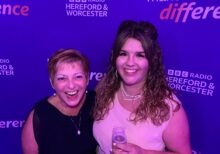 She received the honour at a gala event held at West Midlands Safari Park after being nominated by the mother of a resident she supports.

‘I’m overwhelmed. This sort of thing doesn’t happen to me,’ says Charli. ‘I never expected to get an award for what I do every day at a job that I love. It’s the more rewarding job I have ever done.’

The judges said that everyone nominated were all worthy of the award, but that Charli’s story and her work spoke to them.

Charli works at National Star’s long-term residence at Ledbury Road, Hereford. She was nominated by mum Karen Bacciochi, who also attended the awards with her.

‘Charli has been my son’s key worker for two years and I couldn’t wish for a better person to be involved with the wellbeing of my son Lewis,’ says Mrs Bacciochi.

‘Charli is a “hands on” person tries to get into Lewis’s world, be on the same level as he is, encouraging him to do more. She speaks to Lewis as “an individual person”, never talks down to him, treats him as an adult.’

Making every day an achievement

‘I come across people who in the past have been told they can’t do certain things because of their disabilities or their needs,’ says Charli.

‘I am able to make every day an achievement for them and to be able to accomplish whatever it is that they want to accomplish and that makes me happy.’

Charli started at National Star in September 2019 as a facilitator, who provide care and support for residents. In May 2022 she was promoted to senior facilitator.

‘We are delighted for Charli and her amazing accomplishment,’ said Chief Executive Lynette Barrett.

‘She is a wonderful ambassador for National Star and reflects the commitment of our teams to provide the level of care and support people with disabilities and complex needs deserve.

‘National Star believes in nurturing staff to develop their careers. We look forward to supporting Charli as she further develops her talents with us.’

Ledbury Road also reached the finals as Care Home of the Year in the Hereford Times Health and Social Care Awards. This was thanks again to a nomination from a parent of one of our residents. Thank you for putting us forward!