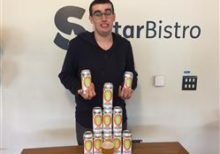 National Star, a county charity for young people with complex disabilities and learning difficulties, is saying cheers to beer lovers.

Eight county breweries worked together to create the collaborative beer, called Star Session, which was brewed by Stroud Brewery. It was the second year National Star has been the event’s chosen charity. The money was raised through beer sales, a mini beer festival staged by Stroud Brewery and a donation from the Cheltenham Beer Week committee.

National Star student Sam Hows, aged 19, designed the label for the collaborative organic IPA. Working with National Star Creative Arts Tutor Louise Adams, the duo created a design incorporating sustainability and organic ingredients. Sam then transferred the design on to a printing block and did all the printing.

‘On behalf of the young people we support we want to say a big thank you to everyone who has helped raise the money.’

‘We’re pleased that the money raised will go to a county-based charity,’ said Leigh Norwood, who is the chair of the Beer Week organising committee.

‘National Star does great work and we are proud of our partnership with them and what we have achieved together.’