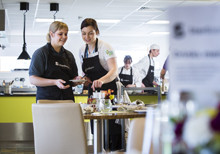 We are very pleased to share the news that the StarBistro, based at our campus in Ullenwood, has won the honour of being voted the People’s Favourite in the Sustainable Restaurant Awards.

We beat more than 800 entries to make the shortlist of five, and won the national accolade with a public vote, announced on Sunday 22 February.

The StarBistro is a local, ethical and sustainable eaterie that also develops the skills of people who have learning or physical disabilities or acquired brain injuries.

Open to the public, our bistro serves delicious dishes made with fresh and locally-sourced produce at great value for money prices. The bistro is a partnership between National Star and The Wiggly Worm charity.

Rob Rees, who founded The Wiggly Worm, said:  ‘This award has really touched us and reinforced to us  that our work  and the way in which we do it can have a positive impact on individuals in our team, our trainees as well as our customers.

‘The award assumes quite rightly that what we offer is as local, ethical, sustainable and value for money as possible.

‘In addition though, it celebrates the above and beyond and the huge heart that we have – yes for our work with those who may find life trickier directly at StarBistro and in our Wiggly Worm workforce but also the thousands of people we have fed externally who may well be in food and working poverty.’

Last year our second eaterie, StarBistro at Pepper Crescent, opened in the Royal Crescent in the centre of Cheltenham.

The team at StarBistro prides themselves on inclusivity by trying to accommodate any type of special dietary requirement. Tables occupy only half of the floor space, allowing space for wheelchairs and other accessibility needs.

StarBistro, through The Wiggly Worm’s No Child Hungry Gloucestershire campaign, also helps feeds those living in poverty in the local area.