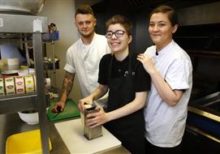 When Chloe Smith started her Steps into Work supported internship with National Star in Hereford, she preferred to write things down rather than speak.

Chloe’s learning disability affects her ability to listen, to concentrate and to speak. She wouldn’t use a phone and would panic if she had to talk to strangers.

She had tried to get a job but without success, and never thought she would get paid work.

Now Chloe works part-time in the kitchen at the Spread Eagle pub in King Street, Hereford, and loves it.

‘My job coach helped me create a CV and helped me practice questions for interviews,’ said Chloe. ‘She helped me keep my placements by reminding me to slow down when I did things and how to plan my bus journey to get there independently.

‘Now I can speak to new people without getting worried. I am much better at dealing with problems, such as bus not turning up and I don’t panic when I am just asking for help.’

‘Chloe’s confidence has grown so much since she started her supported internship with National Star,’ said her mum, Emma Smith.

‘The level of support she has received from her job coach at National Star has been incredible.’

Chloe also volunteers at a St Michael’s Hospice charity shop, working on the till and labelling clothes to put in the shop.

She said she has made many new friends on the employment skills course and at her work placements.

Charlie Allport, Head Chef at the Spread Eagle, said: ‘Chloe brings laughter and there is never a dull moment when she is in the kitchen. She has become a valued member of our team.’

When Chloe received her first pay cheque she went on her own to her bank to ask for a paying-in book so that she could start saving her money.

A supported internship is a one-year course and runs during term-time, four days a week. At the end of the programme individuals will be supported to search for jobs, apply for jobs and go to interviews. Currently, 70.5% of interns successfully move into paid employment.

Find out more about Steps into Work in Hereford by emailing stepsenquiries@nationalstar.org or phoning 07837 555329.