Dad to take on gruelling challenge in aid of National Star 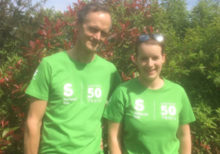 A father is marking the anniversary of the day his daughter was left with traumatic head injuries after a car crash by undertaking a gruelling personal challenge.

But Peter Freeman, from St Albans, says his ‘Dragon Tour’ of Wales over the Brecon Beacons is not as difficult as watching his daughter Nicki spend a month in intensive care after being cut out of her car, only to emerge like a baby who had to learn to walk again.

His three-day challenge, which will see him cycle 500k and up over 6,000km including a total climb higher than Europe’s highest mountain, is a thank you to National Star, which transformed Nicki’s life.

‘This will be the second hardest thing I have endured, but it will only be three days,’ he says.

‘National Star has been opening its doors to young people with disabilities for 50 years. The charity’s focus on the individual’s needs and what they can do, not what they can’t, helped us maximise the outcomes for Nicki.’

Nicki was 17 and driving to her prom when she crashed in a storm. As well as fractures to both legs and her pelvis, it quickly became apparent she’d suffered traumatic brain injuries. She was transferred to a specialist neurology hospital where she spent a month in intensive care.

‘Getting the phone call that every parent dreads was awful, our only thought was to get to Nicki in the hospital before it was too late.

‘Then two days later we found ourselves being overtaken by an ambulance on the M1 knowing that was our daughter being rushed to London under the blue lights and sirens. We had no idea if Nicki would ever wake up, or whether she would have any quality of life after the accident.’

When Nicki regained consciousness her jumbled brain couldn’t operate the left side of her body.

‘She had to learn to do everything again, just as she had as a new-born baby,’ Peter remembers.

‘She went to National Star and gained so much more independence and control over her life.

‘This is a chance to say thank you for the help they have given Nicki and to help them to keep doing that good work for another 50 years. Thanks to them Nicki is now living in her own flat and finishing a BTEC qualification.’

Nicki’s next hurdle is to get a job but her hunt so far has been dispiriting.

‘She has so much to offer,’ Peter says. ‘She has come so far in seven years, now we look forward to a future we feared she wouldn’t have at all.

‘As a family we are incredibly proud of what our daughter can do thanks to National Star.’

Peter’s challenge takes place from 9 to 11 June. Visit his fundraising page to donate.