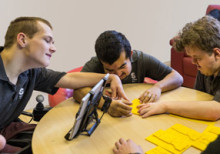 Elliot Roberts is visually impaired and needs help everywhere he goes, including short trips around National Star’s residence in Gloucester.

But his friends and fellow learners Kristian Harrison and Steve Martin have come up with a unique solution. They are making Elliot a personalised 3D tactile map of Elizabeth House, where they all live.

‘The idea came from our discussions with Elliot. We wanted to make something that would make Elliot’s life easier at Elizabeth House,’ said Steve, aged 23.

Steve and Kristian, who uses a communicator he controls with his eyes, learned to use a special software to create a three dimensional map of the residence.

Then they printed it on a 3D printer which was paid for by a donation from Renishaw.

‘We made a lot of mistakes but we have fixed them along the way,’ said Kristian, aged 18. ‘I’m really excited about the project and how it can help others.’

The trio were invited to show off their work at the Bett Show, the world’s leading education technology event staged in London.

With the map, Elliot will be able to go from the lift to his room and to his bathroom without support.

‘It means I can be more independent at college,’ said Elliot, aged 20.

Simon Barnett, the tutor at National Star who is working with the trio, said there were a lot of challenges in creating the map.

‘As Elliot can’t feel enough with his fingertips to read Braille we had to create a new language for him. They have surprised me at how well they have done and I am so proud of them.’

Mr Barnett thinks it may be one of the first times that 3D printing is being used to create a personalised map in such a way.

The map has raised sections with different shapes to help Elliot differentiate between the rooms.

‘The Renishaw Charities Committee is delighted that the 3D printer it funded at the National Star College is being put to such good use to assist Elliot,’ said a spokesman from Renishaw.

‘As a manufacturer of industrial 3D printers ourselves, we know the power of the technology, how it is transforming the way that we can manufacture products and how it is being used to create bespoke objects, including medical devices, that are helping to improve the quality of life for many people around the world.’

‘This is a wonderful example of how supporters enable National Star to use its expertise, which we have built upon for 50 years, to work with young people with disabilities and help them realise their aspirations,’ said David Ellis, Chief Executive of National Star.