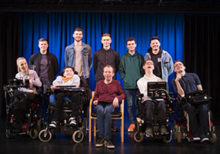 Four National Star students appeared on BBC’s The One Show in their quest for their own ‘voice’ for their communication devices. These are high tech communication systems that synthesise speech from text to produce a ‘voice’, enabling those with no natural voice or communication difficulties to express themselves.

Comedian Lost Voice Guy, who also uses a communication device, visited National Star to talk to the four about the challenges they face.

Ted Barnard-Edwards, Nathan Groves, Talia McDowell and Jack Smith all want regional accents to reflect where they live, but there are very few age-appropriate regional voices for communication devices.

A customised voice costs around £500 which most families cannot afford. National Star’s speech and language therapists have been searching the country for age-appropriate regional accents and have discovered there is not much choice.

‘It doesn’t sound like me,’ said Talia. ‘I’m originally from just outside Larne in Northern Ireland, but the only Irish accents available are southern Irish which is completely different and just listening to myself now I sound like an aul doll (or old woman if you didn’t understand that) – I’m only 19!’

Nathan, 22,  who has a generic Welsh accent, wants a regional Cwmbran accent. ‘I’m from Cwmbran, most people where I live have an accent that doesn’t sound anything like this voice. It makes me sound like a middle-aged man,’ he said.

Jack, 22, said: ‘I sound boring and not like my family. I am from Wolverhampton – the Black Country.’

‘I’m a boccia player. I want people to know it’s me talking,’ said Ted, 17, who wants a Berkshire accent. ‘My own voice will help people recognise me. Especially when I’m receiving my medal at the Paralympics!’

The One Show found a voice donor for Jack who is now proudly using his Black Country accent on his AAC device. He also got to announce the players at a Wolverhampton Wanderers match, a team he has followed since he was a child.

Hundreds of people responded to The One Show appeal to find voices for the other three students and the BBC will return to National Star later in the year when Nathan, Ted and Talia have their own unique voice. Watch a video of the making of the One Show film here.

A further appeal to find 17-year-old Cain a Gloucester voice for his communicator has resulted in scores of responses from the public after he appeared on BBC Points West TV.

Cain is so frustrated by the limited choice of voices that he uses the Queen’s voice. ‘I would like an accent and a voice that allows me to feel more confident talking to girls my own age,’ said Cain.

National Star has been inundated with generous offers from members of the public wishing to donate their voice, and we are not looking for more at this stage. However, potential voice donors should keep an eye on our social media channels and website for regional-specific voice appeals in the future.

Donate to our Technology Fund

We have established a Technology Fund which funds projects such as this and other life-enhancing technology which enables young people with complex disabilities to have a voice, access learning and control their environments. You can donate to the Technology Fund here. To find out more about the Technology Fund please contact the Fundraising team by emailing fundraising@nationalstar.org or calling 01242 524478.