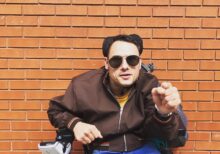 Poet Shaun Fallows, a former National Star student, has made his debut at the Edinburgh Festival Fringe.

The show, called ‘Sunny and Chair’, was a humorous look at life as a person with a disability.

It was at National Star where Shaun first truly discovered his love of music and poetry – even though he was studying sports at the time.

‘Like many young people, I went to National Star with only one ambition and loved football and sports so just assumed something in that area was for me,’ says Shaun. ‘Although I did enjoy the sports course a lot and made a tight group of friends, I naturally just got more into poetry and music and wasn’t fully sure by the end of college if I wanted to continue with sports.

‘What National Star gave me was the freedom and confidence to find who I was. I always had a big loving family at home in Wigan but not my own mates. I didn’t know who I was or could be.

‘College became a chance to reinvent myself a bit and I always remember it blew my mind when some at college said to me ‘you’re smart and funny Shaun’ and I thought ‘wow, perhaps I am’. Meeting new people and independence was the biggest thing I took from National Star. Just the belief that maybe I could get involved and be a part of our massive world.’

Two decades after leaving National Star, Shaun started performing his own material at open mic nights. He joined a local poetry group in Wigan where the tutor encouraged him to be seen and heard on a bigger stage. He has published two books of poetry – ‘They Race Me in the Streets’ and ‘Access – Ability’.

Shaun says his experience at Edinburgh showed him how much of the world still doesn’t disability.

‘Almost every venue I tried to get into had no disability access, which meant I couldn’t get the camaraderie with other performers and to watch other shows,” says Shaun.

‘Yet I came across lots of kindness and support from people on trams, the group on after me in my venue and people in the local café where I relaxed and tried to prepare every morning.’

Shaun is already thinking about returning to Edinburgh with a show about how he couldn’t see any shows and working on a third book.

You can find his first two books here and here.