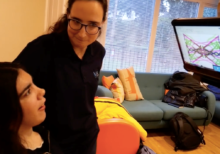 The inspirational lives of two former National Star students, who are now living independently in London, have been featured in a film being premiered this month (June).

Stephanie Harris and Joseph Scoates were learners at National Star in Gloucestershire for four years and three years respectively, both leaving in 2016. They now live in supported accommodation in London doing the perfectly ordinary things that young people do.

Their lives have been caught on camera by Oscar Kraft, a 19-year-old filmmaker and editor, who has created a short film, ‘The extraordinary lives of Stephanie and Joe’ capturing the magic of their lives.

Stephanie is 26-years-old and a keen artist who uses eye gaze technology to paint. She also takes part in cycling challenges and is something of a social butterfly. Joe is 25-years-old and loves nothing more than playing FIFA on his Xbox and listening to music. He embraces technology and his expertise with Alexa and a Grid Pad make him the life and soul of the party.

Oscar was inspired to make the film to prove that there’s often more to the ordinary than meets the eye.

Stephanie and Joseph’s former Speech and Language Therapist Heather Cater and National Star Programme Manager Joanne Kingsbury-Elia are travelling to London for the premiere and looking forward to catching up with Stephanie and Joe.

‘We were so thrilled that Stephanie and Joe have such positive memories of their time at National Star and that they wanted staff from the charity to be at the premiere,’ said Programme Manager Joanne Kingsbury-Elia.