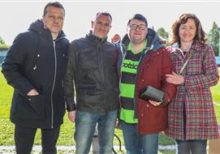 Now the 20-year-old has been named the club’s ambassador of the year in a new award.

National Star, a charity which supports young people with complex disabilities and learning difficulties, has been involved in FGR’s ambassador scheme for five years.

Frazer, a residential student at National Star at Ullenwood, has been an ambassador for two years.

In front of hundreds of cheering FGR fans he received the William Fletcher Award.

The William Fletcher Award remembers a special ambassador from Paternoster’s School who died just over a year ago. William was a regular at FGR and was signed up and ready for another season when he passed away.

‘National Star has been involved with our ambassador scheme for a number of years, and Frazer has been the most proactive ambassador by far – bringing college mates along to games, despite the distance and difficulty getting here,’ said Phil Butterworth, Vice Chairman, Forest Green Rovers – who created and leads the ambassador scheme.

Frazer has Hypothalamic Hamaratoma, a rare condition which causes benign tumours to form in the hypothalamus at the base of the brain. The hypothalamus plays a crucial role in many important functions, including: releasing hormones and regulating body temperature.

But he doesn’t let it get in the way of football! When he is not following FGR Frazer supports Arsenal.

‘When I found out that I had won the award it brought a little tear to my eye,’ said Frazer. ‘I really enjoy being an ambassador and I love football.’

He organises his transport and support to matches and also worked with support staff to bring fellow college students to matches.

When he is not following football Frazer is doing his part for the environment, including helping staff at his college residence recycle more.

‘If we don’t recycle more and think about the environment how will our world turn out,’ he said.

‘Frazer has been the most pro-active ambassador we have ever had and he is also very active on the student union as the green rep,’ said Julian Ralph, who is the Foundation Programmes and Enrichment Coordinator at National Star.

‘He is an incredible ambassador for National Star and we are delighted his efforts have been recognised.’

Forest Green honoured several ambassadors for their support of the club throughout the year.