Fundraiser cycles from London to Paris for National Star 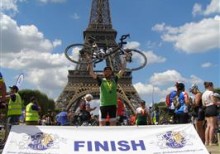 When David McCall saw the Eiffel Tower he knew he’d achieved his goal – cycling from London to Paris in four days to raise money for National Star.

The 32-year-old father of four took on the 308 mile challenge despite only taking to two wheels a couple of years ago. And despite some serious saddle sore and aching limbs he made it – smashing his target with £1,639 raised to help support people with physical and learning disabilities and acquired brain injuries.

‘I’ve never been to Paris before so I was sight-seeing from the saddle. Seeing the Eiffel Tower and the Louvre and all these iconic landmarks was incredible.’

David was inspired to do the journey because his sister, Kim, works as a learning support co-ordinator at National Star and he watched The Unbreakables, last year’s documentary about the charity.

‘The Unbreakables was really eye-opening, seeing these young people who are just trying to live normal lives and what the charity does to expand their abilities, things like helping them develop their communication skills. It’s crazy to think how limited their options are without National Star.’

David previously took part in the charity’s annual Star Cycling Challenge but going from 60 miles to more than 300 was tough.

‘I didn’t suffer as much as I thought I would but it did get to the point where I was having some saddle pain but then it went completely numb and all the feeling disappeared.

‘On the second day I was feeling really good in the morning and I went a bit harder and faster than I should have done and didn’t refuel properly and I really paid for that. I hit the wall and had to lay down to get my energy back.

‘I felt like I couldn’t do much more but there was no way I was going to let everybody down. Thinking about National Star really spurred me on, I knew I had to persevere.

‘Now I think it was the probably the best thing I have done in my life. Riding down the Champs-Elysées and round the Arc de Triomphe and knowing that’s where the Tour de France finishes was amazing.’

David has collected all his paraphernalia together to keep for his children, Amelie, nine, Rigby, six, Monty, four, and three-year-old Wren. Included with his maps, keepsakes, and the medal he received was a card Monty made to wish his dad good luck that he took with him on his journey.

‘I didn’t allow myself to think about it at the time but once I was done and I saw that I’d clocked up 308 miles I realised what a huge undertaking it was. I couldn’t have done it without the support from my family and friends, I can get on a bike and ride to Paris but all the fundraising and sponsorship is what makes it worth it.’

Whether you’re an organisation, school, community or one person, there’s lots of ways you can support National Star. Click here to find out more.