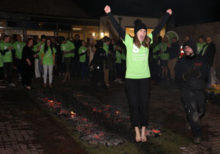 When it comes to fundraising for National Star, there are 69 people who have proven they can stand the heat.

They walked barefoot over hot coals in a firewalk in aid of National Star.

Their efforts have raised more than £6,000 for the charity, and more sponsorship is expected in the coming days.