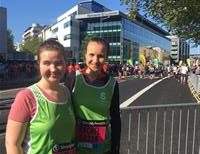 Four runners laced up their trainers and took to the roads to raise money for National Star.

Holly Woodruff completed the Bristol Great 10k & Half Marathon with her big sister Rachel in just under two hours.

For Holly it was a special achievement for her as it was her first 10k event. The 21-year-old has a rare condition called Ohdo Syndrome, which has massively affected her physical and mental development.

‘It was an amazing experience, seeing Holly rise to such a challenge and take it all in her stride,’ said Rachel, 22.

‘Seeing her understand why we were doing it and how proud she was making everyone was incredible.The actual running experience was really fun. We walked most of it but managed to run some part of every kilometre. We listened to some music and Holly had lots of high fives and cheering from spectators.’

Holly is a second-year student at National Star.

Rachel has taken part in challenge running events before, but it is the first time Holly has been able to be part of such a challenge.

National Star staff helped Holly with training, taking her on increasing lengthy walks to build up her stamina.

‘This was such a huge challenge to Holly which was what made it so special,’ said Rachel. ‘She has often shown jealousy at some of the things both myself and our older sister can do and therefore it was just so amazing to complete this challenge with her and see how proud and happy she was at the finish.

‘Since starting at National Star Holly has grown more independent, in regard to her daily routine and her general safety out and about. She has started using her communication device more which has helped her ever-growing confidence and sociability.’

Gill Henry, Head of Fundraising at National Star, said: ‘What a wonderful achievement for the sisters and their efforts will enable us to continue to support young people with complex disabilities and learning difficulties.’

You can support the pair by visiting their fundraising page.

Meanwhile Peter Felce, along with his eldest son Michael, completed the Rightmove MK Marathon in Milton Keynes in aid of National Star.

Peter’s youngest son Jason is a second-year student at National Star. He communicates through an electronic device he controls with eye movement. Through that eye-gaze device Jason can also use his computer and text on his mobile.

‘During his National Star journey they have helped Jason achieve so much,’ said Peter. ‘We wanted to ensure that Jason and others like him to continue to succeed at this fantastic college and charity.’

‘It was a fantastic experience running in the MK half marathon,’ said Peter.

‘The support we received from everyone has been brilliant. We were thrilled to be able to help raise funds for National Star so they can continue their fantastic work with students like my son Jason. They have helped him achieve so much in the two years he’s been with them and given my family some wonderful memories.’

Michael said: ‘Running my first half marathon was a challenge but one I am extremely happy to have achieved! There was a great atmosphere, amazing people both on and off the course and was topped off by my little brother who told me via his communication aid, ‘I am proud of you’.’

Peter and Michael have so far raised £624.