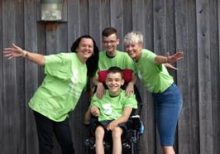 A Gloucester mum who is scared of heights is taking to the sky to raise funds for National Star.

Helen Gregory is terrified of flying but on 14 September will take part in a sponsored skydive.

She didn’t even sign up for the skydive. Her friend Deana Webb secretly registered them both and told her afterwards.

Helen supports Deana’s 17-year-old son Cain who is a day student at National Star at Ullenwood.

‘There is no way on earth I would do anything like this except for Cain, said Helen, aged 45. ‘My family don’t think I will go through with it but there is no way that I can’t!’

Deana, from Gloucester, and Helen are raising money for National Star which enables young people with disabilities and learning difficulties achieve their potential.

‘It’s a way to give something back to National Star for all the help Cain’s had,’ said Deana. ‘There’s been a massive change in him since he has been at National Star. He has grown so much in confidence.’

So far Deana has raised £235 of her £400 target. People can sponsor her on her fundraising page.

Helen has so far raised £381 and people can sponsor her on her fundraising page.

‘We’re delighted that Deana and Helen are taking part our skydive,’ said Catrin Viveash, Fundraising Manager at National Star. ‘Without the support of the community we couldn’t provide the standard of facilities that we do and to support the young people.’