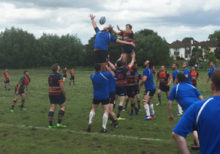 When rugby-mad Neil Williamson organised a charity match in aid of National Star, he faced a tough dilemma – his team mates became the opposition.

A member of Gloucester Old Boys RFC, Neil played for his company team, ITS Construction at the Old Boys ground in Myers Road, Gloucester.

‘I might as well have painted a big target on my back – my fellow club players were out to make it tough for me, but it was for a great cause so I didn’t mind,’ said Neil, who is a recruitment consultant at ITS Construction in Cheltenham.

It is the second year the charity match has been played in support of National Star.

The ITS Construction team included an ex Worcester player and an ex London Irish player, as well as support from Dowty’s RFC and Coney Hill.

But it wasn’t enough and Gloucester Old Boys won – for the second year.

‘It was a great day but now we have a point to prove next year when we take to the pitch,’ said Neil. ‘This isn’t like a normal charity match – we are serious about winning!’

Players came from ITS Construction offices across the country. Last year the event raised £305 and Neil hopes they will top that this year once they have counted up the donations.

‘The support of ITS Construction and Gloucester Old Boys RFC though events such as this will enable us to provide the same high level of care and provision in years to come.’