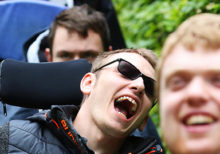 National Star has welcomed an Education Select Committee report which calls for a massive overhaul of the special educational needs system.

The national charity, based in Ullenwood, Gloucestershire, was the only voluntary sector specialist college to be asked to present evidence to the committee earlier this year.

The report states that failures of implementation of the 2014 reforms have resulted in ‘confusion, and at times unlawful practice, bureaucratic nightmares, buck-passing and a lack of accountability, strained resources and adversarial experiences, and ultimately dashed the hopes of many.’

Funding shortfall has affected the delivery of SEND reforms

It says the significant funding shortfall has been a contributory factor to the failure of delivering the SEND reforms and calls for a systemic culture change within schools, local authorities and the government.

David Ellis, Chief Executive of National Star, who gave evidence to the Committee, has called for the government to play a more central role in the funding of young people with complex needs.

‘The ones who have truly been let down by the system are those young people with complex disabilities and learning difficulties, those whose needs will prevent them from accessing mainstream further education,’ he said.

‘Localism and integration isn’t always the right answer. Economies of scale must be taken into consideration. For those high needs learners, national centres of excellence are the best – and most cost effective – options. Specialist providers have a vital role to play in supporting these high needs learners.’

National Star works with young people with complex disabilities and learning difficulties from across the UK. It is Care Quality Commission and Ofsted Outstanding.

The charity provides learning programmes, residential care and support to enable young people prepare for adulthood. As well as Cheltenham, National Star has education centres in Hereford and Wales.

Mr Ellis supports the report’s call for a culture change and the creation of a more neutral role to support young people and parents during needs assessments.

‘It isn’t the Act which failed but the implementation of the Act. What has happened is that an aspirational Act was not shored up with the appropriate funding. The result is a confrontational system – not just between parents and local authorities but between health, education and social care teams.

‘The systemic culture change must be led from central government downwards. Rather than focusing on short-term budgets and cost saving we need to focus on the individuals and how we can support them to become active and equal members of society.’