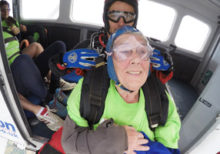 A great-grandma celebrated her 85th birthday by soaring above the clouds ‘like an eagle’ in aid of National Star.

Kathleen Ellerker did a tandem skydive, jumping out of a tiny plane 10,000 feet above the ground for National Star, where her daughter Lillian works. The fun-loving pensioner, who has seven grandchildren and 12 great grandchildren, says she’d do it again in a flash if she could afford to.

‘I’m only 4-feet-something. The plane door was quite high so the instructor had to pick me up and push me in,’ she said, chuckling away.

‘When we jumped out there was so much wind and we twirled around, then we were free-falling for a moment before the parachute opened. You have your arms out and you feel like an eagle flying above the clouds; it’s so serene and beautiful.’

Kathleen, a devoted Christian, says her faith made her feel safe as she tumbled out of the door.

‘I didn’t feel any fear. It’s a wonderful, wonderful feeling, floating like a bird.’

Since she was 62 she has done two bi-plane loop-the-loops and another skydive.

Mrs Ellerker raised about £1,000 on her own from this jump, which has already been donated to National Star, enabling us to continue supporting young people with complex disabilities and acquired brain injuries.

‘They had a fantastic day, they were all so full of energy afterwards and I think they’d all like to do it again. Kate said when Kath just disappeared out of the plane door she thought “oh my goodness” but they all loved it.

‘We were absolutely thrilled to bits to reach a total of £3,500 including Kath’s donations.’

Mrs Ellerker’s family organised an 85th birthday picnic at the airfield directly after her jump, with about 20 of her family members there to celebrate.

Mrs Ellerker said: ‘It was an unforgettable day. I was so happy to do this for National Star, they do such marvellous work.

‘I’ve met some of the young people with disabilities and they are lovely and the staff are lovely too. If I was younger I would love to work for them. I feel humbled to have done this for them – they deserve every penny.’

Find out more about taking on an exciting skydive in aid of National Star.