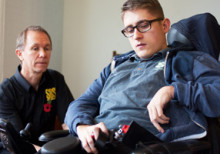 We’re thrilled to share that an innovative wheelchair lap belt designed by National Star has made it to the finals of a prestigious national competition.

It is one of 10 vying for the Nesta Inclusive Technology Prize. The winner, who will be selected on 17 March, will receive £50,000 to help bring their product to market.

Run by Nesta, with support from the Office for Disability Issues, Innovate UK, The Department for Business Innovation and Skills and Irwin Mitchell, and in partnership with Leonard Cheshire Disability, the Inclusive Technology Prize is designed to inspire technological innovations in assistive products, systems and aids and encourage co-creation with disabled people.

More than 200 ideas were originally received and 10 finalists, including National Star, were chosen and each received up to £10,000, alongside support to improve and refine their products.

Our National Star team at Ullenwood developed HandyClix, a wheelchair lap belt that can be attached and released using one hand, to promote the independence of wheelchair users with a range of functional impairments.

It was the brainchild of Mary Burton, a physiotherapist working at National Star.

Frustrated by the reduction of independence she saw for wheelchair users as a result of traditional lap belts requiring two hands to attach, she began a search for a one-handed belt.

When this search proved fruitless, first in the UK and then worldwide, the idea for the innovative product began to evolve at National Star.

‘Some wheelchair users have the use of only one hand and rely on third party support to attach their lap belts after they have transferred from their chairs, usually from bed to chair, toilet to chair, or from wheelchair to seat,’ said David Finch, National Star Director.

‘This can be both intrusive and impersonal, promoting dependency and requiring additional support from a carer.’

The HandyClix belt can be attached for right-handed or left-handed users, and is designed to support people with hand tremors, visual impairments, and limited strength and manual dexterity.

It is competing against other ideas including an affordable 3D printed bionic hands to an open source communication aid.

In a survey NHS wheelchair service departments in the UK, every one who expressed an interest in HandyClix, which will launch at NAIDEX, a trade fair for technological innovations in healthcare in April.