Hannah is named Support Worker of the Year 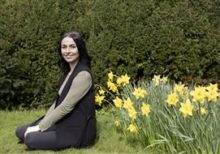 National Star support worker Hannah Bernard has won a national award in recognition for her work with students with disabilities and learning difficulties.

The 28-year-old from Cardiff was named Support Worker of the Year (Wales) in the National Learning Disabilities & Autism Awards in Wales.

She will now join other regional finalists from England, Scotland, Northern Ireland and the Channel Islands at the national Learning Disability & Autism Awards finals in London in October.

Hannah, a key member of staff at National Star in Wales, was an original member of the team at Mamhilad, near Pontypool, when the charity first opened its doors.

It is the first award she has ever won and says she couldn’t believe it when her name was announced at the ceremonies at The Marriott Hotel in Cardiff.

‘When they called out my named I was in shock. I couldn’t believe it,’ said Hannah. ‘Everyone at National Star do an amazing job, but to have an award to celebrate the work you love doing is amazing. I’m incredibly proud to be representing National Star.’

John Mann, Head of National Star in Wales said: ‘Hannah always does more than just her job, she ‘makes a difference’ to all the students, staff and parents she supports.

‘Her passion, creativity and use of community connections are inspiring. However Hannah’s overwhelming contribution is the empathy and warmth she shares with everyone she connects with.’

After graduating in drama and theatre, Hannah worked as a personal assistant to a young man and knew almost immediately that her future career lay in health and social care. Hannah now works as a Facilitator, training to be a tutor, at National Star in Wales.

As one of Mamhilad’s Welsh speakers Hannah weaves the Welsh language into all aspects of the curriculum. She starts each morning session with ‘bore da’ and routinely chats about the weather in Welsh.

She enjoys taking the students to a weekly all ability dance session in Abergavenny and helping them to express themselves through movement.

Earlier this year, National Star was named the Specialist Provider of the year at the Tes Further Education Awards at the national ceremony in London. Currently 16 young people access National Star College in Wales.