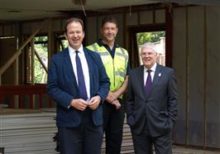 Mr Norman visited 1 Ledbury Road where construction work has started to convert the bungalows into a long-term home for seven young people. The work is due to be completed in October.

In February National Star, which has been based in Hereford for five years, announced it had purchased 1 Ledbury Road from the Wye Valley NHS Trust. It has outgrown its current site which it does not own.

National Star is raising £2.2 million to buy and convert the property. The main building, which was once a vicarage, will be converted into an education facility that includes therapies and personal development. Work on the main building will take place after the bungalows are completed.

‘I am delighted that National Star is investing in Hereford and is committed to our young people with disabilities and learning difficulties,’ said Mr Norman.

‘There is a huge local need for this kind of high-quality care. National Star is committed to providing education, care and support to young people who need that help the most. I look forward to returning to No 1 when the bungalows are finished and the young people have settled in.’

The new education facility at Ledbury Road is due to open in 2020.