National Star to feature in BBC documentary Katie Price: What Harvey Did Next 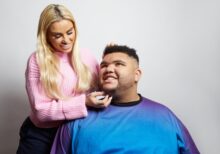 Life at National Star will feature in a new BBC documentary, Katie Price: What Harvey Did Next, to be broadcast on Monday 7 March at 9pm on BBC One and iPlayer.

The documentary follows 19-year-old Harvey as he embarks on his first term at National Star.

What Harvey Did Next, by Minnow Films, goes behind the scenes and discovers how staff at National Star work with young adults with disabilities to realise their aspirations.

Filmed over several months of learning and living in his own flat, this film puts Harvey at the centre as he navigates college life, forming friendships and settling into the place where he hopes to spend the next three years.

What Harvey Did Next is a film which shines a light on a side of disability that’s not often spoken about; independence, love and letting go, coming of age and reframing relationships as we grow.

David Ellis, Chief Executive at National Star, said ‘National Star is passionate about raising the profile of young people with disabilities and giving them a voice. This documentary shines a light on the problems and challenges young people, and their families, face as they seek the most appropriate education, care and support to prepare them for adulthood.’

Find out more about National Star’s learning programmes and facilities

Share this:
Posted: 4th March 2022
Tags: bbc one, harvey price, katie price, national star, what harvey did next
Back to index