Learners tell Minister for the Constitution what democracy means to them 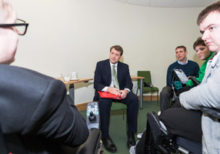 Minister for the Constitution, Chris Skidmore, spoke to learners at National Star in Cheltenham about the challenges they face engaging in the democratic process.

Learners engaged in lively discussion with the Minister on what democracy means to young people living with disabilities in the West of England and the issues they face.

Mr Skidmore said: ‘I was impressed by the level of debate and interest shown by National Star’s college students today. This government is committed to a democracy that works for everyone and this means understanding the needs of young people with disabilities, and other under-registered groups, on their own terms.

‘It’s crucial you register to vote so you can have your say. Whoever you are, whatever your background, wherever you live – your voice matters.’

‘It was great to have the chance to talk to Mr Skidmore about voting and the barriers we face,’ said Rhys, aged 18.

‘When you have disabilities you have to fight for all your choices in everything from where you go to college to where you live. Things which able-bodied people take for granted, such as going to a polling station, can be a challenge for a person with disabilities.’