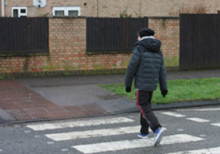 The project is run by National Star in partnership with Gloucestershire Police and Crime Commissioner Office.

It was launched last year as a pilot and was aimed at young people with learning and physical disabilities, victims of crime, at risk of being involved in crime or who have attendance issues at school.

The grant will allow the scheme to continue for three years, enabling LiftTraining to work with young people one to one, helping them gain the practical skills needed to make their journey to school, work, training and even social activities.

Ian Clark, LiftTraining Programme Manager at the project, said: ‘Independence, and especially independent travel, is very important to all young people but especially those with disabilities.

‘Funding from BBC Children in Need means that we can provide the trainers necessary to empower young learners with personalised and structured programmes that build their confidence with independent travel.’

Many learners are entitled to use funded travel passes but are prevented from doing so because they do not have the confidence to use public transport or the skills to make an application for a pass.

The school attendance of some of the learners who completed LiftTraining was 60%. After they completed the LiftPlus training it was more than 90%.

Gloucestershire Police and Crime Commissioner Martin Surl said: ‘We’ve enjoyed a really good relationship with National Star and were delighted to be able to support the development of the LiftTraining Programme. The Commissioner’s Fund awarded the scheme £35,000 in 2014 to get things started and it’s good to see that it’s helping to attract more investment to make it sustainable.’

Speaking of the new grants, Clare Cannock, BBC Children in Need Regional Head of the South and West, said: ‘All of the projects that we fund make a tangible difference to young lives, and National Star is no exception. In the months ahead they’ll work closely with some of the young people in Gloucestershire who need their support most. To all our fundraisers who have made these grants possible, a very big thank you.’