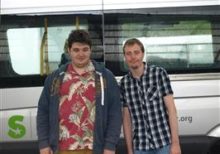 Thanks to a specialist travel training programme run by National Star, both now have friends, can travel on their own and even have paid work.

Mr Chris Brierley, Deputy Police and Crime Commissioner for Gloucestershire, met Dan and Gareth to find out how the scheme has changed their lives.

National Star, which is based in Gloucestershire, is celebrating its 50th anniversary.