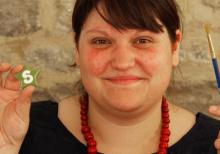 Georgia Buffoni never thought she would ever work full time – let alone run her own business. Now the 25-year-old Cirencester businesswoman is helping to ensure other young people with autism get the opportunity to develop their potential.

Georgia, who took over Pick a Pot & Paint in the Cotswolds, in Blackjack Street, raised money for National Star by taking part in our Star Day appeal.

During June 2014 customers had the option of buying and painting a ceramic star for £3, which Georgia then turned into a brooch.

For every sale Georgia donated £2 to National Star. By supporting people with physical and learning disabilities and acquired brain injuries, we resonated with Georgia, who, in 2013, after suffering years of ill health and depression, was diagnosed with autism.

‘Until March I was on Employment and Support Allowance with no idea of what I wanted to do,’ she said. ‘Due to my health I was taken out of school at 15. I only have one GCSE and no training.’

Since her diagnosis, she says her ‘life has turned around.’

She added: ‘I am finally finding out what is right with me. It made such a difference to know that it wasn’t my fault that I couldn’t get a job and that there was reason for how I was. Until then I felt like an alien.’

Georgia has been able to modify parts of the business, such as opening hours and creating open tidy spaces, to allow her to manage her condition.

‘I’ve made the shop and studio a bit more autism friendly by making extra room to move and sit so everyone can be more comfortable,’ she said. 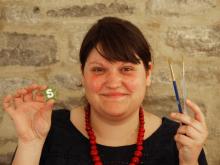