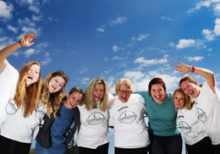 Fearless Helen Howe is used to doing scary things to raise money for her favourite charity, but when she jumped out a plane at 10,000 feet she took her mum and staff with her.

Helen, who co-owns Cheltenham’s Lumière restaurant with husband Jon, made sure she was first to jump when she enlisted her mum, Terresa Aubrey, 62, her waiting staff and friends to be among the people who are making 50 skydives to celebrate National Star’s 50th anniversary.

After taking the plunge on Sunday Helen says they are all walking on air.

‘It didn’t feel scary but it was the tiniest plane you have ever seen. At one point I thought “oh, we’re really high, we’ll be jumping soon,” then he said we were only at 1,000 feet.’

At 10,000 feet Helen and the instructor she was strapped to shuffled to the edge of the plane and ‘fell out’.

‘It was incredible,’ she says. ‘We fell through a cloud then our parachute opened and we were floating. The views over the green fields of the Cotswolds and across the countryside were beautiful.’

‘I asked my mum how it felt to watch me fall out of a plane and she didn’t even notice,’ Helen laughs. ‘She absolutely loved it.’

Helen, Jon, and their restaurant team hope to notch their total raised for National Star from recent events to more than £7,000. The sole man on their nine-person team – Ant Davies from Cheltenham wine merchant and bar The Grape Escape – has also added hundreds to the total.

Helen, 35, hopes the feeling of invincibility the team felt when their feet touched the ground will leave them with a buzz for a while.

The day after the skydive Camille Pope, 20, from Cheltenham, was taking second-year exams for her medical engineering degree at Cardiff University.

‘She was on such a high on her way back to Cardiff so hopefully it will help her ace her exam,’ Helen says. ‘It was a great experience for everybody.’

Helen says: ‘When we were invited to go up to National Star for a tour we got the chance to see what they are all about and where the money they work so tirelessly to raise goes. If you see what they do you can’t not support them.’

Would you like to become one of the 50 skydivers taking the plunge for National Star this year? Find out more and sign up.