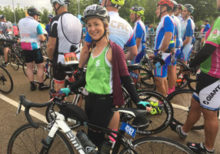 A primary school teacher got on her bike to say thanks to National Star for supporting her cousin.

So far Lynne has raised over £1,000 in sponsorship. You can still donate to Lynne’s challenge by visiting her fundraising page.