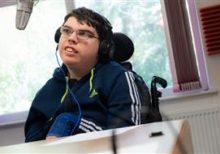 A group of Pontypool young people with disabilities are making to the airwaves with their own radio show.

The five students at National Star in Mamhilad recorded an hour-long programme with Cwmbran-based Able Radio. Their efforts will be broadcast on Monday 27 May at 6pm.

For one student the experience is a dream come true. The 21-year-old from Newport who has autism is keen to work in media when he leaves National Star in July.

National Star is a charity which supports young people with complex disabilities and learning difficulties. It set up its education facility in Mamhilad three years ago.

The five students wrote scripts for the radio programme, chose their favourite music and practised recording, experimenting with voice volume, projection and speed of delivery.

‘This is a wonderful experience for the students and an opportunity to improve their communication skills and to learn to work together as a team. We are grateful to Able for allowing us to do this,’ said Joshua Fretwell, Programme Manager at National Star.

One of the students uses a communication device to speak. He uses simple switches to move the cursor around.

‘It’s a real opportunity for students who don’t have their own voice to show the public that they are more than able to make their thoughts and views understood through technology,’ said Joshua.

National Star was named the Specialist Provider of the year at the Tes Further Education Awards at the national ceremony in London. Currently 16 young people access National Star College in Wales.

The judges described National Star as ‘an inspiring place’ that puts its learners at the centre of everything it does.

The judges for the Tes (formerly known as the Times Educational Supplement) said: ‘They (Star) are swimming against the tide by sticking to what they do best – and doing it better than the rest.’

Able Radio is a social enterprise which empowers people with disabilities by giving them the support and tools to broadcast shows.

Find out more about National Star in Wales.