Meeting the love of my life at National Star 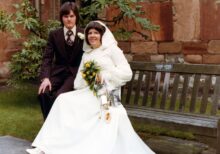 Barry Moss met the love of his life, Linda, when they were students at National Star in 1967.

They were the first couple at National Star, then known as the Star Centre, to meet at college and subsequently marry.

When Linda sadly died in February this year, Barry felt it was fitting that he raised funds for National Star in memory of Linda. The donations from Barry, family, friends, and residents at the retirement village where the couple lived added up to almost £1,000.

‘I could think of nothing more appropriate and fitting than the place where we met, and which had such an enormous impact on both our lives. I also felt that the Star Centre, under its current name of National Star, having succeeded with us and so many of our contemporaries, should be supported in helping today’s generation of young disabled people,’ said Barry who lives in Birmingham.

Barry started at National Star in 1967, the year the charity was launched. Linda (nee Crow) joined in January 1969. Their friendship grew but it wasn’t until the day Barry was due to leave college that he realised the depth of his feelings.

‘Linda was very upset, and I remember her crying while I was close to tears myself,’ said Barry. ‘Just 24 hours later I had made the decision to leave my home village and return to Cheltenham to live and work so that I could be closer to Linda while she remained a student at the Star Centre. This level of independence was only possible through my accelerated development at National Star.’

The couple settled in Birmingham. Both worked and Linda was passionate about swimming, travelling and friendships, with some of her oldest friends going as far back as her junior school days. They were married almost 47 years.

Barry said attending National Star had had a huge impact on their lives and their independence.

‘We both met people with more severe disabilities than we had, which made us realise how fortunate we were in comparison,’ said Barry. ‘The Star Centre was transformational for both of us because we were far from capable of living independently at the start of our two years there. It gave me the ability to face up to challenges and to treat life more as an adventure rather than something to hide from.

‘Linda and I were together for 53 years, almost 47 of them as a married couple. In all that time Linda was the most precious thing to me and I consider I was very lucky to have her.’

Find out more about what National Star offers

Share this:
Posted: 30th May 2022
Tags: donations, national star
Back to index