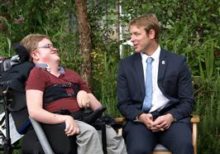 Simon Welch will oversee National Star’s learning programmes in Cheltenham, where the charity is based and its centre in Hereford.

He is also responsible for the charity’s work-based programmes including supported internships, National Star’s extensive therapy provision and its LiftTraining programme, based across the country, which empowers disabled, disadvantaged and vulnerable people with the skills and confidence to travel independently.

Simon first started at National Star exactly a decade ago as a personalised learning mentor, working one-to-one with learners.

But it wasn’t his first encounter with National Star. As a 14-year-old Simon visited the Ullenwood campus with a friend to find out more about what the charity did.

‘Through my friend I met James who was a student at National Star and I was interested in the challenges he faced,’ said Simon, aged 37.

‘James’s carer watched me with James and asked me if I had ever considered a career working with young people with disabilities and it went from there.’

Simon went on to complete a degree in Conductive Education, focussing on neurological disorders, and later qualified as a teacher. After working in Hereford and Birmingham Simon joined National Star in 2008.

National Star, which employs 1,000 staff across all its facilities, was last year named Specialist Provider of the Year in the prestigious Tes Further Education awards.

‘What I value most about National Star is that we all believe in a high quality across the board and in everything we do, from our residential care, to our teaching to our facilities,’ he said.

‘Regardless of what the activity is, whether it is on a supported internship programme or providing long-term care, the staff work together to find the right solution for the young person and won’t rest until they have.’

Born in Gloucester Simon grew up in the Forest of Dean where he still lives with his wife and three daughters, aged two, five and seven.

David Ellis, Chief Executive of National Star, said Simon was the strongest candidate for the post.

‘What makes National Star is that everything we do has the young people we support at its heart which has always driven Simon in his roles here,’ said Mr Ellis.

‘National Star provides a range of services for young people across the country and Simon understands the organisation inside and out. We are proud of our succession planning and our investment in leadership development as Simon is proof.’