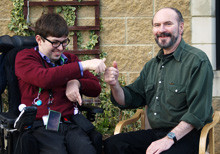 When Derek Thornbury first joined us at National Star, it was in a temporary and voluntary capacity.  Fast forward to March 2015 and Derek has just retired after an amazing 42 years with us!

‘My stepmother told me about National Star and I thought I would go and volunteer until Christmas,’ said 65 year old Derek. ‘I really didn’t know anything about the college. The learners were so welcoming I thought, I like it here.’

After becoming a full time Facilitator, Derek went on to support thousands of young people with disabilities at our Ullenwood based college, and last month a special party was thrown to thank him for his hard work.

It was at National Star that Gloucester-based Derek met his wife Adele, who has worked with us for 23 years and has also just retired. They have been married for 40 years and have a 36 year old daughter Megan.

‘I owe so much to National Star, the staff and the learners,’ said Derek. ‘When I first came here I realised it was exactly what I wanted to do.’

Principal Kathryn Rudd adds: ‘Derek has a magical ability to work with any learner and he got the best out of them all. He truly has supported learners to achieve their potential – and at a conservative estimate has impacted on the lives of more than 4,000 young people throughout his time at National Star.’

Derek has seen huge changes in his time. He has worked with four principals and seen the college support about 40 young people a year to more than 1,600 people across the UK.

He has worked with thousands of learners and it is the young people who have kept him going.

‘The learners come first. Even after all this time every new learners is different. They are all individuals and such personalities. They keep you from getting stale doing the same job because every day is different.’

So what’s next for Derek and Adele? Travel! The pair have bought a camper van and their first stop will be visiting Scotland to see a former National Star colleague.