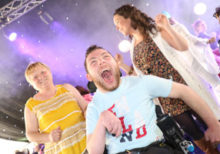 When National Star opened its doors in 1967 it had just 10 students. On Wednesday 10 May we celebrated our 50th anniversary in a year in which we will support 1,500 young people with disabilities.

Staff and students gathered to mark the golden occasion and look back on National Star’s history. They dressed for the event, with scores sporting fancy dress from 60s flower power to American navy officers and vivid-coloured tutus.

National Star opened in Cheltenham on May 10, 1967, founded by a group of Cheltenham people who wanted to educate children whose lives had been affected by thalidomide, a drug used to prevent morning sickness that resulted in thousands of babies being born with severe malformations. Our first 10 students had disabilities including cerebral palsy, polio, spina bifida, brain injuries and learning difficulties. Since then we have expanded hugely, breaking boundaries, pioneering the use of revolutionary technology, and supporting young people to acquire skills that transform their lives.

Our Ullenwood base, now a national centre of excellence, is 16 times bigger than it was in 1967 with facilities including an acquired brain injury and rehabilitation unit. Education centres have opened in Mamhilad, Wales, and Hereford. Training programmes are undertaken in East Sussex, Derbyshire, Lewisham, Worcestershire and London. Long-term accommodation is available in Gloucester and Malvern. And students learn workplace skills in our print shop and two StarBistro restaurants.

But David Ellis, Chief Executive of National Star, said with Government statistics showing a 50 per cent rise in the number of children with disabilities, complex needs and complex autism since 2004, there is more to be done.

‘From the beginning National Star’s belief has been that, with high quality and specialist support, people with disabilities can realise their aspirations,’ he said. ‘We believe it is about what people can do, not what they can’t.’

The 50th party included street entertainment, live music, a disco, a barbecue and afternoon tea. The highlight of the day for the students was the wheelchair accessible hot air balloon. They enjoyed rides on the tethered balloon, which was sponsored by Renishaw.

National Star student Bethan Griffiths, aged 22, said: ‘National Star has changed my life. It has helped me learn to be independent.’

The day finished with staff and students gathering to sing happy birthday.