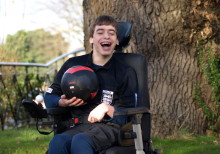 Nathan has cerebral palsy, and found the first match he officiated to be a big challenge. ‘I was so nervous. I thought the players and managers would give me a hard time because I was in a chair and they would question why I was refereeing able-bodied football.’

But to Nathan’s surprise, he had no problems. ‘People with disabilities can do what able-bodied people do. We just do it in a different way. I have cerebral palsy but that doesn’t mean I can’t do things.’

Steve Tanner, a referee development officer for Gloucestershire Football Association, has praised Nathan’s skills. He said, ‘The Gloucestershire FA is delighted to be able to support Nathan in achieving his dream of refereeing.’

Nathan, who is studying B-Tech Sport level 3, is a huge Chelsea fan. He finishes college in July, after which he has high hopes of working in the sport industry. He lives at our Cheltenham residence in Overton Road.

Nathan adds, ‘I want to work with children in the sports industry. I want to get a job and be independent. Going back to my parents would be a step backwards. It’s important you respect every single person whether they have a disability or not. We can all contribute to this world.’