National Star in Hereford is growing 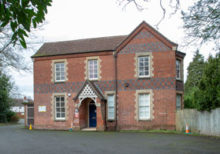 National Star has announced major plans to develop a Hereford property dedicated to the support of young people with disabilities and learning difficulties.

National Star has purchased 1 Ledbury Road from the Wye Valley NHS Trust and is raising £2.2 million to buy the site and create long-term living accommodation for young people with disabilities together with an education, personal development and therapies facility.

But National Star has outgrown the site and 1 Ledbury Road was an opportunity too good to miss, said John Mann, Head of National Star at Hereford.

‘We’ve been a part of Hereford for three years but 1 Ledbury Road will give us a permanent base in the area and the opportunity to create fully-accessible facilities for the benefit of the young people in this community.’

National Star at Hereford offers life-transforming education programmes combining learning, personal development and specialist therapies along with a high level of support for young people and adults who have physical disabilities and / or acquired brain injuries, alongside associated learning, behavioural sensory and medical needs. Most have complex learning difficulties and disabilities.

The property was formerly used as a children’s respite centre. It was closed in 2017.

Mr Mann said plans were at an early stage but the proposal is to upgrade the bungalows to create long-term living for seven young people, aged over 18, with disabilities and learning difficulties.

‘We launched them because young people told us that they preferred living with their peers and continuing their development rather than live in senior citizen homes, which are often the only available provision.’

Mr Mann said the bungalows would be available from autumn 2019 and the education provision, which would be for day students, would move to the new site during summer 2020.

Councillor Elissa Swinglehurst, Cabinet Member for Children and Families, said: ‘Herefordshire Council welcomes proposals to support young people and adults with disabilities and learning difficulties within the county. We have a strong working relationship with National Star and look forward to working with them on this new venture.’

People can find out more about National Star and meet some of the students at a pop-up shop in the Old Market from 4 to 9 March, from 10am to 4pm.

They will be selling a range of goods which they have made, including brooches, prints and cards and other crafts.

National Star launched a community fundraising campaign to help pay for the refurbishment in Hereford. Find out how you can help.