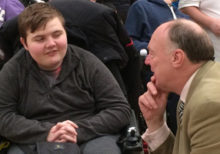 More than 50 young people from across the county attended our campus in Ullenwood, near Cheltenham, to learn about hate crime and hate incidents. The conference is believed to be the first in the country specially for young people with learning difficulties and disabilities.

‘We recognised that disability hate crime and hate incidents are under reported, not just in Gloucestershire but across the country,’ said PC Steph Lawrence, Gloucestershire Constabulary’s Hate Crime Co-ordinator.

Nationally, approximately 95% of disability hate related crimes are not reported.

‘People with disabilities come to accept that it’s part of their day-to-day lives and they say it happens so often that they say “what can the police do about it” and there is a fear of approaching us,’ said PC Lawrence.

‘Perpetrators often target people who are vulnerable because they think they can get away with it. It is not only victims who can report hate crime. Any people who witness hate crime or hate incidents need to report it so that we can tackle this issue.’

Connor, a 20-year-old student at National Star, knows firsthand what it is like to be the victim of hate incidents.

Connor, who uses a power wheelchair, was called names including ‘cripple’ and was the target of pranks and cruel jokes at his secondary school.

‘It just messed me up and I became depressed by it and that abuse stays with you,’ said Connor. ‘But now I have developed a thick skin and I am stronger.’

Joe, a 15-year-old student at Alderman Knight School in Tewkesbury, said the hate abuse made him feel like ‘an outcast’.

‘I was diagnosed with autism at quite a young age. When I was at school I was seen as the oddball and I was often teased and taken advantage of,’ he said.

‘Often people do it for a laugh and a giggle because they are not like us. They don’t see it as a crime but they don’t know what it’s like for the person.’

The hate crime conference was run as a pilot project last year and this is its first year as an established event.

As part of the event, ex-offenders who are part of Gloucestershire Constabulary’s Great Expectations programme led workshops talking about the effects of crime and hate crime.

Among the schools taking part were: National Star, Belmont School, Alderman Knight and the Gloucester and Forest Alternative Provision Schools.

Listen to BBC Radio Gloucestershire’s coverage of the event (tune in at minute 42.12).