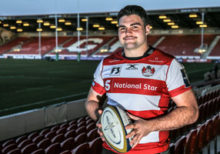 National Star is celebrating the end of its 50th anniversary year by holding a special online auction.

The charity will be auctioning 18 Gloucester Rugby shirts that have been worn by the team’s players, including sports stars Ben Morgan, Richard Hibbard and David Halaifonua.

The shirts were donated to National Star following Gloucester Rugby’s televised match against Ospeys on 26 January. For the Anglo–Welsh Cup match, Mitsubishi Motors in the UK, the main sponsors of Gloucester Rugby, donated their match day rights to National Star. The Gloucester players wore National Star’s logo on their specially–made shirts, and the charity also took over Mitsubishi Motors’ presence in the match day programme, in the LED pitch side adverts and on the ground’s big screen. It is believed to be the first time that a partner of a top-flight rugby club has supported a charity in such a way.

The shirts belonging to Ben Morgan and Richard Hibbard offer the additional appeal of having been signed by the players. All proceeds raised from the auction of the shirts will go directly to National Star.

Gill Henry, Head of Fundraising, believes that the auction is a great way for rugby fans to get their hands on a piece of sporting history, as well as make a difference to the lives of young people with complex disabilities.

‘We were delighted to have this incredibly generous support from Mitsubishi Motors as part of our 50th Anniversary celebrations,’ says Gill.

‘The sale of these exclusive match worn shirts will support our work with young people with complex disabilities and we hope as many people as possible will get the chance to bid on them. It’s a great way for supporters of National Star and for rugby fans alike to get their hands on a piece of National Star and sporting history.’

The auction will launch on eBay at 8am on Saturday 26 May and will run for ten days. View the shirts and place your bid.