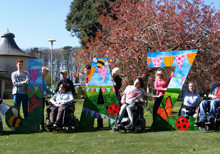 Eight of our Creative Arts learners have created the iconic letters that spell out ‘JAZZ’ for the Cheltenham Jazz Festival.

The letters are painted with the quintessential English summer scene with blue skies, bunting, butterflies and the rolling Cotswold hills. This is the first time that National Star has been involved with the Cheltenham Jazz Festival.

‘The JAZZ letters have become an iconic part of the Jazz Festival site and so we’re absolutely delighted that this vibrant artwork by the Star College will be such an integral feature of the Festival.’

Learner Morgan Jones, 19, said it was exciting to see his work on display in public: ‘It’s nice knowing that our work will be seen by the public,’ he said.

The Frank Sinatra-themed ‘Friday Night Is Music Night’ featuring Kurt Elling, Clare Teal and Anthony Strong is a Festival must, as is an exclusive celebration of Gershwin music featuring Laura Mvula and Gregory Porter. Jamie Cullum returns as Guest Director and will perform with US jazz funk jam band Medeski, Martin & Wood.

The full Festival line-up and tickets are available at: www.cheltenhamfestivals.com.