National Star Principal receives an OBE from the Queen 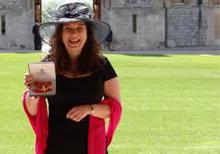 Kathryn Rudd, our National Star College Principal, has received an OBE from the Queen. She joined such celebrities as Dame Angela Lansbury, Nicolas Parsons and sculptor Antony Gormley at Windsor Castle.

‘The Queen said she had visited National Star a long time ago and asked about the complexity of some of our learner’s disabilities,’ said Kathryn.

‘When I told her it was an honour to work with such fantastic young people, her face lit up. Her aides said she would be the first to recognise what people could do rather than what they couldn’t, which is exactly what we do at the college.’

Kathryn was recognised for her services to further education for young adults with physical and learning disabilities and acquired brain injuries. She has been Principal of National Star College for four years, and is also Chair of the Association of National Specialist Colleges (Natspec).

Kathryn has played a leading role in lobbying the Government over both the new funding reforms and the proposed Children and Families Bill, meeting with key ministers and speaking in the House of Commons.

She received the award in front of her family.

‘It was lovely though I just wish everyone from National Star could have been there to share it with me – they so deserve it,’ Kathryn said.

Ofsted inspectors have ranked National Star College as an ‘outstanding’ specialist education provider, highlighting particularly the quality of our provision, outcomes for learners, leadership and management, and safeguarding practices.