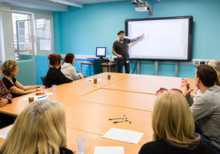 National Star College is the first further education college in the country to receive a new national training award.

National Star won the award for our induction training for staff. The awards were launched by the City & Guilds Group.

Dawn Macey-Norris, Head of Continuous Professional Development, is due to receive the award from the Princess Royal at a gala ceremony in St James’s Palace on 24 November 2016.

Our two-week induction course is a mix of classroom and in the workplace learning. Every member of staff has an individual learning plan and is encouraged to continually develop their skills.

One person who has benefitted from National Star’s commitment to personal development is training assessor Andy Lupton.

He joined National Star as a volunteer 27 years ago and, besides a six-month break, never   left. He has had a wide range of roles including working in care, with the physiotherapy team, as a keyworker, a teacher, an instructor and now training assessor.

‘I came as a volunteer at 18 years old because I had signed on the dole and I was bored. My friend’s older brother was doing volunteer work so I went to this agency and said I wanted to be a volunteer.

‘They said they had this opening at National Star in Cheltenham. I grew up in Kent – I hadn’t even heard of Cheltenham and I had no idea of disability.

‘I remember standing in the dining room like a startled rabbit and the students saying to me “you know that you can talk to me” and helping me understand.’

Andy is part of the five-member training team and says the team is thrilled to receive recognition for their work.

‘I love my job. We want to impart to the new staff that passion we all have for the job and the people we work with. We’ve all worked on the floor and that’s important because we can say “we understand. We’ve been there and done that”.’

City & Guilds Group Chief Executive, Chris Jones said: ‘All of the successful organisations deserve enormous praise. I hope these awards have shone a light on how important it is for businesses to invest in training to boost their productivity, address skills gaps and develop their leaders.

‘This has never mattered more than in today’s uncertain economy. I hope this year’s winners inspire other organisations to share their experiences, and put forward their training and development success stories.’