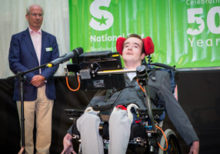 A student who overcame his shyness to win a national Young Enterprise award to a student who completed a marathon in her wheelchair were among those honoured at National Star’s annual Leavers Awards Ceremony.

Supporters and families packed the sports hall at the Ullenwood campus to celebrate the achievements of the 55 leaving students.

Bethan Griffiths, who completed the Brighton Marathon in her wheelchair, received two awards: the PJ Crook Award for her photography and the Personal Development Award.

Lee received the national special achievement award in recognition of his personal development from a shy and nervous person to an outgoing and confident young man and managing director of National Star’s Young Enterprise company.

Zoe Bateman was presented with the Alex Hassett Award for Assistive Communication. The award was presented by speech and language therapist Jon Brough, who is retiring from National Star after 36 years.

Rhys Joyce received the Student Making a Difference Award, which is voted on by all staff and students at National Star.